I haven't find any official titles for each episode, so I have used box numbers to identify them.

Directed by ??
Turtle realizes that he has the key to hidden secrets. There in not only wealth but priceless information which can be used for good or evil. When he discovers that a box owner is a man who runs a protection racket with publicans as his victims, Turtle, who happens to like publicans, not only takes advantage of the opportunities to feather his own nest but makes the victimized publicans happy by smashing the protection racket.
Additional Cast:
Godfrey James as Percy Bullit
Barry Stanton as Geordie Sam 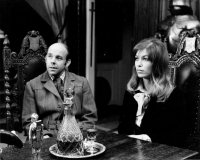 Directed by ??
Turtle opens another of the boxes and discover the last will and testament of the recently deceased national hero Sir Aubrey Braithwaite-Hobbs. It then transpires that the gentleman has amased a sizable fortune over the years  and Turtle and Eddie set about selling the contents of the will to the highest bidder among the legatees.
Additional Cast:
Elspeth March as Lady Prunella Hobbs
Donald Burton as Major David Rething
Christopher Whitehouse as Obelisk
Prunella Gee as Samantha Craig

Directed by ??
The fourth box is opened and Turtle & Eddie learn the secrets of a property racketeer - and also find a way of using Indian Rupee notes for doing a good deed.
Additional Cast:
Tony Melody as Colour Sgt Arnold
Zia Mohyeddin as Subabar Garung
Saeed Jeffrey as Ras Patel

Directed by ??
Superintendent Rafferty, the detective responsible for tracking down the stolen safe-deposit boxes, announces that he has his first real lead on the case: jewels belonging to a leading socialite. Then Turtle discovers that the jewels are imitation...
Additional Cast:
Leueen Willoughby as Anthea Goodliffe
Michael Williams as William Nesbitt
Paul Shelley as Alex Corton

Directed by ??
Turtle and Razor Eddie set out to bring a crooked casino owner to justice when they open the box containing his incriminating secrets. In doing so, they have the unconventional help of an ambitious army officer.
Additional Cast:
Steven Anderson as Major Simon Manning (According to NZ Listner)
John Mormington as Major Manning (according to actual episode credits)
Clifford Rose as Det. Insp. Mason
Tony Anholt as Nigel Cranley
Jonathan Hydeas Mohammed
Martin Read as George Brayford
Christopher Whitehouse as The Oberlisk
John Dicks as Jake
John Slavid as Croupier
Leueen Willoughby as Miss Goodliffe