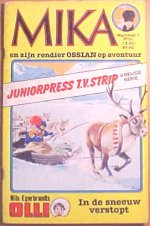 A long time ago, in the 1980s, children in Sweden, Finland, the Netherlands, England and New Zealand (among others) used to rush home from school to watch the next exciting episode of Mika (© Svenska Filminstitutet), the televised story of a Sámi boy (Mika) and a reindeer (Ossian). The unlikely story centred on Ossian's (the reindeer) journey to a Parisian zoo, accompanied by Mika (the boy).

Mika, in Lapland, was walking the reindeer to the airport to put him on a plane to Paris. The boy lost the plane ticket in the snow, so had to walk to Paris with the reindeer. The series followed Mika and Ossian's trip southwards.

Thinking back, it seems completely illogical, and I have no idea why he couldn't go home, or why the zoo didn't send proper keeper to collect him... but ANYWAY. Plot = boy + reindeer walking from Arctic Circle to Paris with no money, no food and no transport. The boy was wearing a hat with earflaps and one of those black and white jumpers like A-Ha used to wear....

While Mika and Ossian did arrive in Paris at the end of the series, by then the pair had totally bonded and Mika was unable to part with his four footed friend.

Until recently the theme music was just a childhood memory that haunted Enid's adulthood, others also recalled the lilting children's voices crying "Mikaaaaaaaaaaaaa!!! Mikaaaaaaaaaaaa!!!" and the tune that went "...'la la loi lo, la la loi lo', apparently." But listen to this: 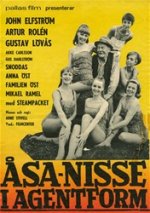 The television series was a creation of Swedish film producer and director Arne Stivell. Stivell was born Arne Ossian Smith (suggesting that the character Ossian was modelled on his own life) on August 3rd 1926 in Rättvik, and died June 23 1997 in Stockholm. In the series the reindeer Ossian made no films, but Mika och renen Ossian (Mika and reindeer Ossian), as it was known in Sweden, came towards the end of an illustrious directing career for Stivell. According to the Swedish Film Database Mika was first screened on TV1 Sverige in Sweden in 1984, with 6 episodes shown between 2 and 7 January, and repeated between 25 August and 6 October. The series screened in the Netherlands in 1985 and was post-dated by a comic book series, Mika och renen Ossian på Äventyr, first published in 1984.

The cast changed week by week as Mika travelled south - the only two named acting credits we've found to date are:

Carl XVI Gustaf, king of Sweden, made a cameo appearance on the show when Mika and Ossian were in Stockholm. 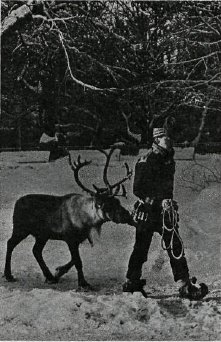 Cream TV recall that "one episode featured Mika betting on a pigeon race along with some locals in [expunged by Enid in disgust] reindeer-roasting village; ends up quids-in, but nearly doesn't turn up to collect winnings."

We think Cream TV didn't like Mika very much, and here at It's so Last Century we'd like to apologise for their distasteful description of reindeer-roasting villagers. 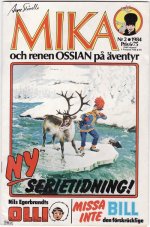 From Television to Comic

The television series led to a comic strip, published in Swedish newspapers. The series was written by Kjell E. Genberg and signed by Georges Bess under the pseudonym Nisseman.

In 1984 Mika and Ossian starred in 11 issues of the Swedish comic book Mika och renen Ossian på Äventyr, published by Semic Press and edited by Britt Aurell, and also featuring a re-run of popular Swedish comic strip Olli by Nils Egerbrandt. The comic book was translated into Finnish and Dutch.

In 1983 Swedish game company Alga produced a board game called Mika. Designed by Dan Glinme, according to Boardgamegeek.com "the goal is for each player to be the first to transport yourself and one reindeer from Kiruna to Paris. With Mika-cards you can use different vehicles to move - cars, trucks, train, boat and barges. If you land on a red point you draw a red event card (mostly negative events), and on blue points blue event cards (mostly positive events)". 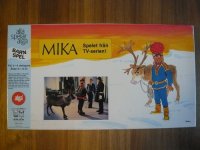 Towns on the map (Swedish names):